This statue has become a landmark in Salem. Can you tell who it is? 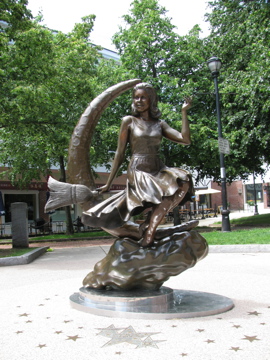 Here’s a closeup of her face

What child of the sixties doesn’t remember watching Samantha and all of her adventures? In June of 2005 this statue was installed and dedicated here in Salem. It was donated to the city by the TV Land Network. There was quite a bit of controversy in the days leading up to the unveiling. Only two Bewitched episodes were said to be filmed here, so it’s relevance to our city’s history was widely questioned.  Some felt that it took away from the seriousness and tragedy of the  witch trials.

There was lots of excitement on the day of the reveal.  I didn’t attend, possibly because my fifth child was three months old  and the thought of taking five children under the age of eleven downtown to see a statue unveiled compromised my ability to breathe properly.  I believe that members of the cast were here, including the actress who played Tabitha. It was a big event!

It seems that Samantha has settled in comfortably. She’s become a landmark  in the center of a long row of wonderful restaurants. Salem’s downtown is hopping these days, and while Samantha doesn’t exactly represent the serious side of Salem,  she definitely adds a whimsical element to a city that is well-known for fun and whimsy.