So, last night at 10:00 just as I was about to take my shower and get my jammies on Michael said “come on outside, it’s time to move the chickens”…  of course my immediate response was ” really? seriously? you want to do that now? do we have to? how about tomorrow night?” Please!!

He said, “nope, no way, their getting too big for the tractor, let’s go!”

So off we went, with a flashlight, in the dark, to the far corner of my back yard.. One by one we dug them out of their little house in the chicken tractor and gingerly placed them, two together, in the nesting boxes in the coop with with big girls.. trying hard not to step on poop or anything else that might be out there.

Doing this meant that I slept lightly, worried about what today would bring. We’ve moved babies up quite a few times and there’s still that mother part of me that worries about what’s going to happen to them out there. I raced out at 6am with my little guy  to check. It’s his job to feed them in the morning and I was concerned that he might encounter an unpleasant situation. Well, they were all in a tizzy but everyone was alive and well. The big girls were outside squawking because their territory had been invaded and they wanted to be fed their treats (have I mentioned that their a bit spoiled). The babies were hopping around the inside of the coop,  kind of upset and disoriented but busy exploring their new home. I went out to check again a few minutes ago and they were all outside in the run together.. at opposite ends but definitely sharing the space.

Before we know it we’ll have a really healthy and beautiful flock of egg layers out there! 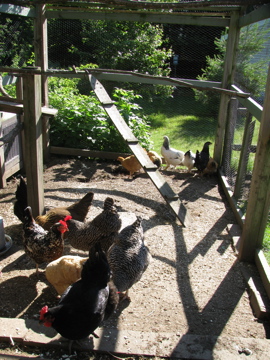