Hi everyone!   It’s Sunday night and I’m just relaxing and reading blogs and facebook and e-mail and thinking about the week ahead.  A Facebook friend of mine posted this interesting article a little while ago so I thought you might like it too, especially you history bloggers. I had no idea that the White House had been gutted and re-built. Enjoy!  Here’s to a good week!

What the White House Looks Like Completely Gutted – NationalJournal.com.

The garden at the National Museum of the American Indian…

yet another great place to take a little break in Washington DC!

Clearly, I enjoyed this trip!

Last week I wrote a post about my visit to the Children’s Garden at the US Botanic Garden. Here are a few photos from the rest of my visit. It was unbelievably hot that day and I had all of the outside gardens to myself. The conservatory was climate controlled, of course, and just beautiful.  If I lived or worked in DC I’m sure that I  would visit very, very often.

The garden is located  just to the right of the capital building, at the end of the National Mall.

Inside the conservatory there are surprises everywhere.

and this beautiful view.

There are educational exhibits.

And there are orchids. Here are a few photos for my friends who grow orchids…

I loved the beautiful pots of succulents and the great benches. 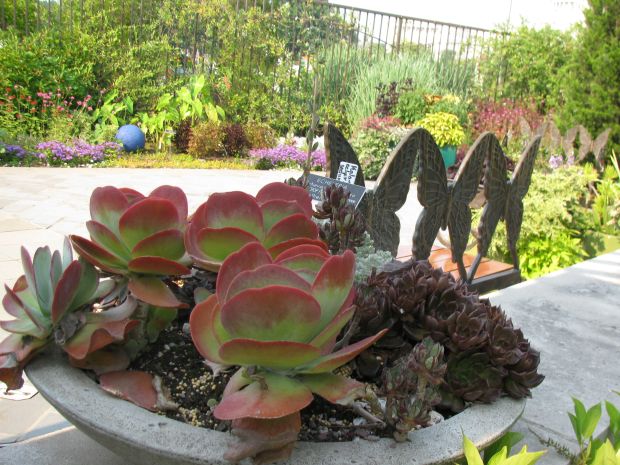 I need one of these butterfly benches! 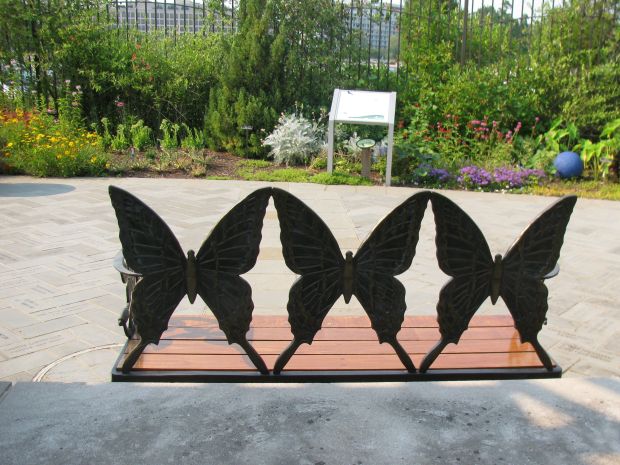 As you know, I love Echinacea… this variety is called Big Sky Sunrise.

The garden was a perfect respite from the DC heat.

I’ll be sure to return the next time I’m on Capital Hill!

We visited lots of great museums, monuments and places of historical importance on our trip to Washington DC a few weeks ago. At the end of the day, after seeing all of those amazing places, it was all about the cupcakes for us!  As I mentioned in yesterday’s post it was really, really hot. 108 degrees is hot!  In spite of this, we still found some energy to check out the Georgetown Cupcake shop, home of the hit TLC show DC Cupcake.   As we left the National Mall and drove a mile west the temperature went down eight degrees according to our car thermometer. Suddenly 100 degrees felt like air conditioning! We thought we could do anything! So we found a parking spot right on the Potomac River and took a hike up the hill to find the famous cupcake shop.

It looked just like it does on the TV show. The man in blue is a security guard and I suspect that he would have been very busy if it had been a little cooler.

My gang was ready to check things out! 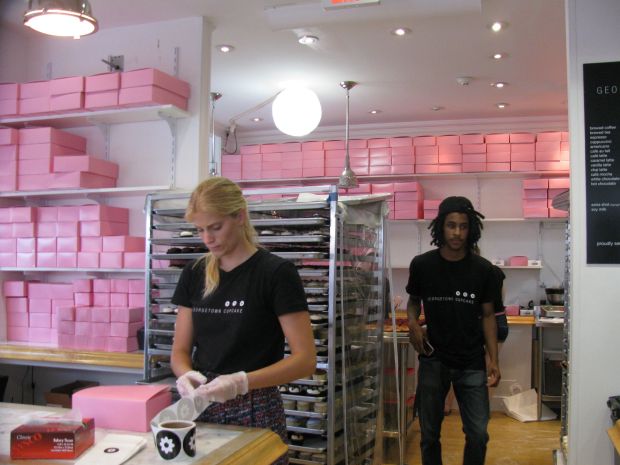 Here’s a view of the inside… many, many boxes and many, many cupcakes! It seemed like a pretty tight space. We wondered if there was a larger kitchen/baking area to the right…

This young man was very patient with us.  It took us awhile to order.

I think that’s because these were the choices. It was just a little bit difficult for anyone to make a decision.

Here’s what we came home with. Yes, there are six cupcakes for seven people. That’s because our oldest daughter is severely allergic to nuts so she had to pass on the cupcake.  She’s a huge fan of the show and was okay with visiting and getting a t-shirt instead of a cupcake.  She loves to bake and uses the recipes from their cookbook all the time. 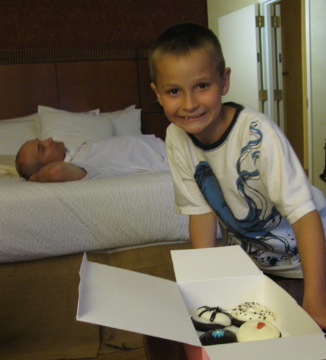 We did make it back to the hotel eventually and  had a cupcake feast (and a nap if needed)!

We were in Washington DC a few weeks ago and I treated myself to a walk in the US Botanic Garden.  I would have taken my  family with me for my walk but it was literally 108 degrees that day. They stayed in the cool air conditioned Smithsonian while I enjoyed the garden. Needless to say I had the whole thing to myself and it was glorious! I spent about 45 minutes relaxing and taking in every nook and cranny. One of the highlights was the Children’s Garden. It’s a beautiful child friendly oasis in the middle of all of the DC action.

The Children’s Garden is located just outside of the huge conservatory.

The plants are so varied.  The  shapes, colors, sizes and textures are really engaging.

The posted rules are simple and child friendly.

I saw pots of plants waiting for kids to put into the ground themselves.

Unfortunately I missed the photo, but I loved the concept!

There’s a fountain (pictured on the left) that children can play in and use to water plants. 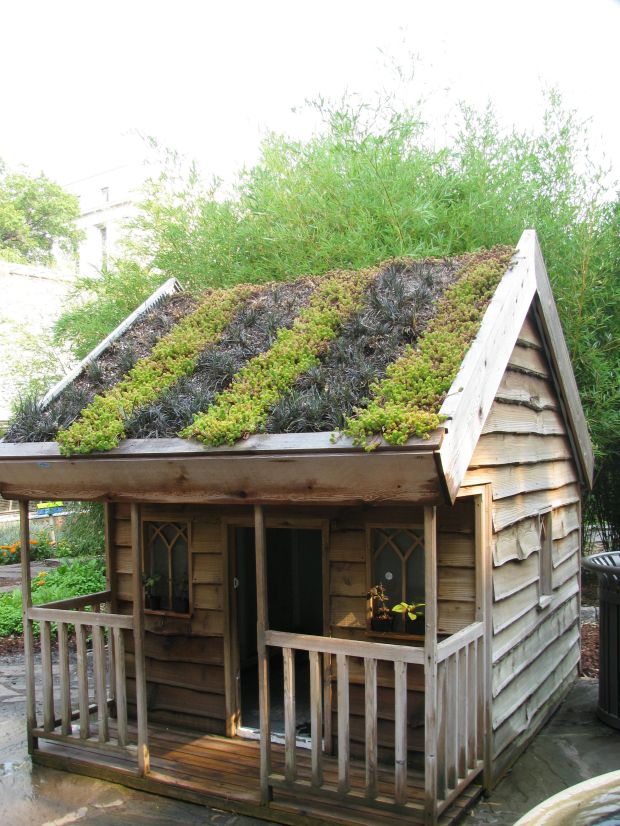 Along with places to hide and run…

and to pretend and just “be”… 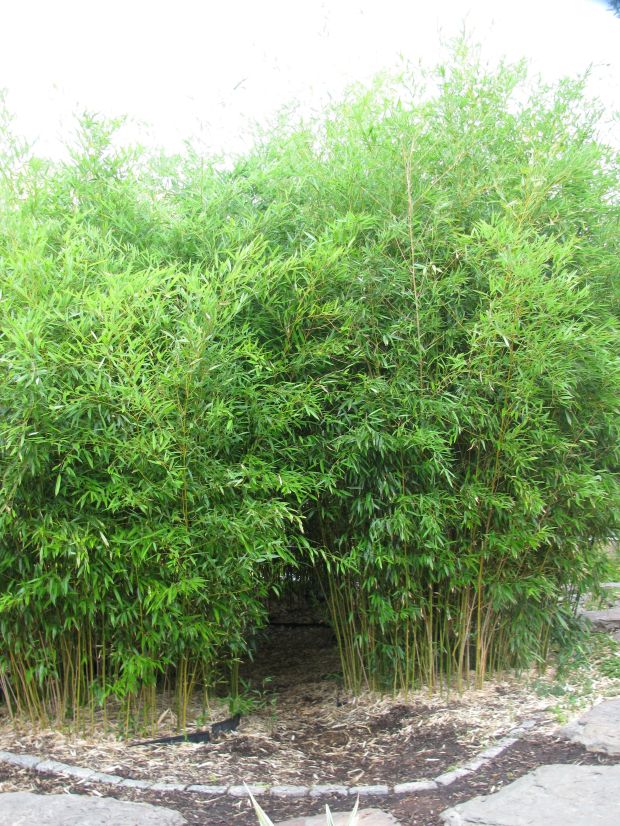 It was easy to get lost in the whimsy and fun.

I hope that next time my children are in the photos too!

They would have enjoyed this… it’s a great place for families to learn, relax and spend time together while enjoying Washington DC.

I could have stayed for hours!